Ilala Lodge Hotel lies right alongside the Victoria Falls Rainforest.  It is a family-run hotel offering luxurious comfort in the heart of Victoria Falls, Zimbabwe.

Surrounded by beautiful gardens, this classically furnished hotel is just an eight-minute walk from Victoria Falls, one of the Seven Natural Wonders of the World. From Ilala Lodge, all activities, restaurants and historical sites are within easy reach.

Day 2 Victoria Falls
Ilala Lodge Hotel is geographically the closest hotel to the magnificent Victoria Falls and is easily accessible to the town centre.

Explore the lush wilderness surrounding the town on a game drive, surf the rapids on a Zambezi River white-water rafting expedition, get your heart racing as you bungee jump off the Victoria Falls Bridge, or view the Falls from the exhilarating angle of Devil’s Pools on the edge of the plunging water. You can also enjoy a legendary Zimbabwean sunset from the comfort of the elegant Ra-Ikane river cruisers.

Day 3 Northern Chobe
Today you will be road transferred from Ilala Lodge to Elephant Valley Lodge, approximately one hour and twenty minutes’ drive away.

The Chobe region is home to the largest population of wild elephant in the world. This is estimated to be approximately 120,000 individuals. Their sometimes daily passage takes them from Zimbabwe through the Chobe and on into Namibia before returning. Elephant Valley Lodge lies along one of these routes and is situated in the Kasane Forest, which is adjacent to the Chobe National Park.

Day 4 Northern Chobe
At Elephant Valley morning cruises along the Chobe River and afternoon game drives inside the Chobe National Park are included.  The water hole, just in front of the camp, attracts all sorts of animals, both day and night, and provides a wonderful spectacle to Lodge guests.

Chobe's wildlife roams in profusion and diversity. It is home to the largest concentration of Elephant in Africa and during the dry season the herds congregate along the fertile flood plains of the Chobe River. Large herds of Buffalo also concentrate on the floodplains during the dry season. Other major species such as Lion, Wild Dog, Puku, Red Lechwe, Sable and Roan Antelope are encountered in many areas of the Reserve.

Day 5 Savute
After breakfast and a morning activity, a lodge representative will transfer you to Kasane Airport (30 minutes) in time to meet the pilot who will charter you, in a light aircraft, into Savuti airstrip, 55 minutes away, for your stay at Savute Safari Lodge.

Ever vigilant of privacy, Savute Safari Lodge accommodates only twenty four guests in eleven thatched chalets built of local timber and one family room which consists of two double bedrooms. The chalets, which have been classically furnished in calm neutral tones to blend with the natural environment, feature expansive private decks, a combined bedroom and lounge area and en suite facilities.

Day 6 Savute
In Savute, your activities centre on game drives. Many trips will incorporate a visit to the Savute Marsh to give you a chance to see the historic presence of the Savute Channel at the marsh against a backdrop of teeming wildlife. You will also be taken to see the ancient San rock paintings at Gubatsa Hills – a small hilly outcrop which forms a prominent landmark in the otherwise flat landscape.

Savute is home to the second-largest summer Zebra migration in Africa; its timing is determined by the rains, but usually occurs between November and December and again between February and April, when the Zebras move from the rivers in the north in search of the rain-ripe grasslands and full waterholes in the southwest of the Park. The migration is always followed by large numbers of predators – the Zebra migration is a must for visitors

The Savute region and the Savute Marsh in particular, is renowned for its intense predator encounters and exceptional game viewing making it one of Botswana’s most popular wildlife destinations.

Day 7 Okavango Delta
After your morning activity and brunch, you will be chartered to Pom Pom Camp in the Okavango Delta, 40 minutes away.

Known as a true Okavango Delta traditional safari camp, Pom Pom lies on Pom Pom Island, in a private Okavango Delta concession, on the head waters of the Xudum river system. Its eastern boundary is the Moremi Game Reserve.  Here you will find a land and water wilderness, second-to-none.

Days 8 and 9 Okavango Delta
Morning and evening game drives with qualified guides are an opportunity to view the ‘big game’ and night life that this breath-taking environment offers.

A mokoro trip is a fantastic way to enjoy the sights and sounds of the Okavango's waterways and wildlife. Although seasonal, boating and fishing are possible at Pom Pom and its guides will be happy to take you to their secret spots to try for African pike and a variety of bream species.

There is the possibility of seeing numerous different species of game, however Pom Pom is also about the nature experience as much as anything else. In addition to big game, Pom Pom is a bird-watcher’s paradise and within a maze of water passages you will find the busy Pied King Fisher and countless other birds that flourish in the water ways. One such bird is the African Jacana, or commonly known as the “Lilly Trotter” which, with its long sticklike leg’s runs along the top of lily pads without causing so much as a ripple!

For your comfort, game drives are offered in new, luxury open-viewing land cruisers, with a tracker and a guide. Giant Eagle Owls are resident in the camp and a rare and elusive Pel’s Fishing Owl is regularly sighted.

Day 10 Central Kalahari
After your morning activity and breakfast, you will be chartered to Deception Valley Lodge, 50 minutes away.

This luxury lodge provides a rare type of bush experience in one of Africa's most remote semi-desert areas. Accommodation consists of eight thatched chalets, each with bedroom, lounge and Victorian style bathroom with claw footbath and outside shower. The bedrooms are equipped with overhead fans and mosquito nets. From the deck of your chalet the vastness of the Kalahari stretches for miles in front to you

Day 11 Central Kalahari
On afternoon and night drives guests may expect to see a variety of wildlife including lion, cheetah, leopard, giraffe, kudu and on occasion, the evasive brown hyena. Night drives in particular will reveal a fascinating world of nocturnal species. Bird life is prolific as this region alone has hundreds of species ranging from small finches to large vultures.

An early morning wake-up call, followed by an activity of your choice, returning to the lodge for brunch, and a rest during the heat of the day.

In the afternoon, you will go out on a walk with the 'Bushmen' - the peoples of the San, one of the most ancient peoples of Africa, whose hunting and survival skills are remarkable.

During a walk lasting approximately three hours, they will show you all their medicinal, survival, hunting and habitation skills. Drinks are served from the back of the 4x4 before returning to the Lodge for Dinner.

The terminalia woodlands support many species of bird that would not typically be associated with Kalahari such as crested francolin, paradise flycatcher, white-crowned shrike, black-backed puffback and the white-browed scrub-robin replaces the Kalahari scrub-robin. Black cuckoo arrive in good numbers in summer to parasitize the crimson-breasted shrike. Orange river francolin occur in the longer grasses of the vegetated sand dunes. Gabar goshawk, Lanner falcon, pale-chanting goshawk and greater kestrel are common. Martial eagle, tawny eagle, black-chested snake-eagle and brown snake eagle are the more common of the large raptors.

Day 12 Maun
An early morning coffee followed by an activity and breakfast, before being chartered to Maun Airport, in time to check in for your flight back to Johannesburg International Airport. 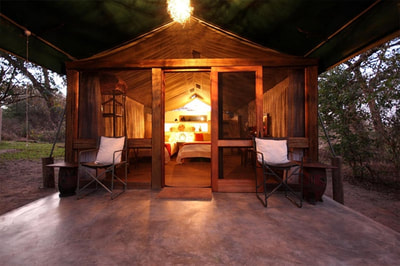 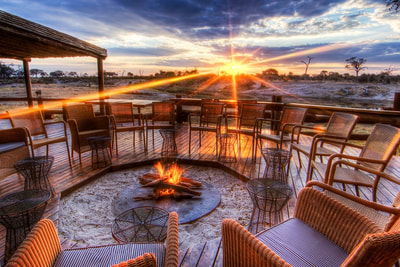 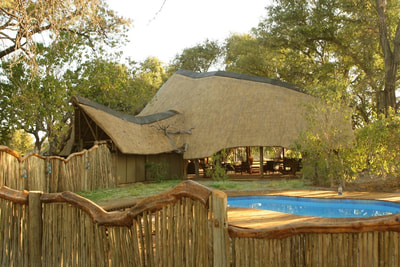 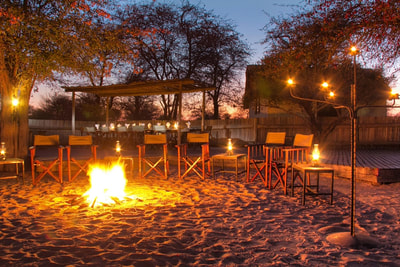