The Kalahari Desert is surprisingly large, as it occupies central and south-western Botswana, parts of South Africa (north west) and eastern Namibia, and covers an area of some 260 000 square kilometres.

It is also part of a large sand basin stretching into Angola and Zambia in the north, through Botswana into Zimbabwe in the east; south to the Orange River in South Africa, and west to the highlands of Namibia. The basin encompasses an extraordinary 930 000 square kilometres, and is estimated to have been formed some 60 million years ago, at the time when Africa became a continent.

In the millions of years that followed, the area of the Kalahari basin became a super lake, which gradually dried out and filled up with wind blown sand, debris and fossils. Today the Kalahari is perhaps not the classic image of sand dunes, particularly in Botswana – where there is grass, trees and scrub.

The Kalahari itself is surprisingly diverse, as is not only includes the massive Central Kalahari Game Reserve, Makgadikgadi and Nxai Pans National Park, but also the salt pans of the Makgadikgadi. These pans are extensive (some 10 000 square kilometres), and are the very real reminder of the extent of the ancient super lake, with clear evidence of a shoreline.

During the summer (November - March) when the seasonal rainfall arrives, the grass bordering the pans turns green and herds of zebra, wildebeest, and other antelope species migrate in large numbers to this food source. The area is also alive with nesting flamingo, pelican, and duck, which also thrive on the algae and minute crustaceans.

Traces of man's occupation of the Kalahari go back at least 25 000 years. Stone Age tools have been revealed by erosion. The Khoi and the San were the first modern inhabitants of southern Africa, and their numerous rock paintings, tools and pottery can be found in the Tsodilo hills and the Lepokole hills in the east and in other rocky parts of the Kalahari. Today, the population has dwindled, but some San still live and follow their traditional life-style as hunter-gatherers in the Central Kalahari Reserve – where they have only recently regained their right to stay in the Reserve.

The name Kalahari is derived from the Tswana word Kgalagadi, meaning “the great thirst.” 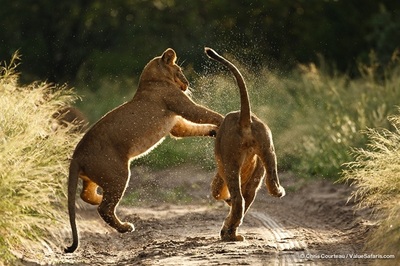 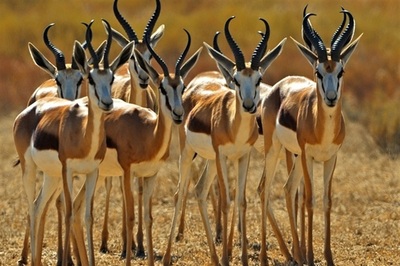 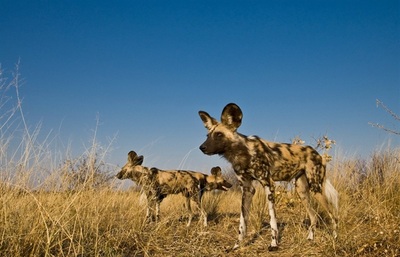