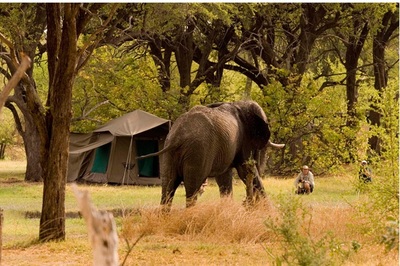 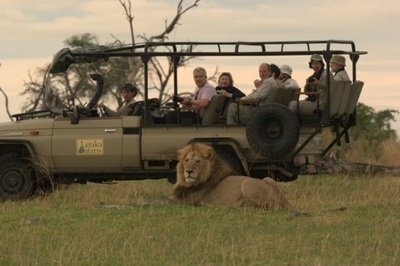 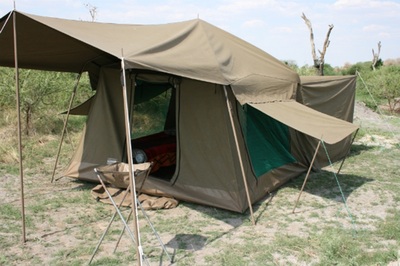 Day 1: Maun to Xakanaxa. Travel Day. 140km (4 hrs)
Most flights to Maun arrive midday; and you will be met by your guide for the drive into Moremi Game Reserve.  If you are flying in on the day of the safari, please make sure you do not arrive in Maun any later than 14h00. If possible, and pre-safari night in Maun is recommended.

Your first 3 nights are spend camping in the Xakanaxa region, where you explore the surrounding wilderness on game drives during the day.

There is the chance to see some varied wildlife on the drive from Maun to Xakanaxa (which is within the Moremi Game Reserve) - include large breeding herds of elephant that live in the mopane scrub; on the open plains large herds of buffalo and lechwe antelope can be seen and in the waterways rafts of hippopotami are a common sight. Birding can also be excellent, with predators being well represented, along with hornbills, cuckoos, whydahs and honeyguides, for example.

Your 3 nights are spent in a private Tented Camp; explore the area on morning and afternoon game drives

The Moremi Game Reserve is known for its excellent wilddog sightings; and the Xakanaxa area is home to a resident herd of several hundred buffalo whose range covers the territories of at least 4 prides of lion. Breeding herds of elephant move between their browsing areas in the mopane forests and the fresh water of the Okavango.

Here the Manuchira Channel is known as the Khwai River at its eastern most extremity. The day’s journey follows this water course, with the track weaving from the riverside and floodplains into the mopane veld and the woodlands that make Khwai one of the most scenic and unique areas of the Okavango. You pass the magnificent Dombo Hippo Pools in the morning stopping to enjoy the scenery and the antics of the resident hippo.

The western mopane veld is home to mostly breeding herds of elephant; the eastern reaches of Khwai is home to some impressive old bull elephants. The mature bulls revel in the cool waters of the Khwai and are far more approachable while drinking and bathing than the breeding herds. The River also has an unusually high density of hippo as well as some huge crocodile. Leopard, cheetah, serval and lion are common predators along this route and both Xakanaxa and Khwai are included in the home ranges of 2 different packs of wild dog. General game includes southern giraffe, plains zebra, tsessebe and red lechwe with roan and sable antelope being less common residents.

Your 3 nights are spent in a private Tented Camp; explore the area on morning and afternoon game drives

Days 5 & 6: Khwai Exploration Days.
The Khwai River forms a boundary between the Reserve and the community area. Spend the following two nights camping at an exclusive campsite in the community area, exploring the Khwai floodplains on game drives both during the day and at night. Exploring after dark with spotlights offers you an opportunity to experience some of the nocturnally active animals that are rarely encountered during the day.

You also have the opportunity to explore the surrounding wilderness on foot and by mokoro  - a great way to enjoy an up close and personal encounter with Botswana’s flora and fauna. It is important to note that night drives and guided walks are not permitted within the national parks and reserves. These activities are conducted outside the boundaries of the Moremi Game Reserve in the Khwai community area.

You spend your time between the dry-land habitats of the lead-wood and camel-thorn woodlands and savannahs and the riverside and marshy back-waters of the Khwai. If time permits, you visit the lagoons and waterways of Xakanaxa where the largest heronry in southern Africa can be found.

The Khwai region boasts excellent populations of both bull elephant as well as breeding herds. Lion, leopard, serval and African wildcat are common predators of the region with wild dog and cheetah being less common. Buffalo use this area seasonally with large herds moving in during the summer rains. The swampy areas in the west are home to red lechwe. Other ungulates include tsesebe, blue wildebeest, giraffe, kudu, sable antelope, roan antelope and impala.

Day 7: Khwai to Maun. Travel Day. 110km (3-4 hrs)
After an early breakfast depart your camp for the final drive back to Maun, where you should arrive by about 12.00.

Included:
Spacious and comfortable tented accommodation, including beds and bed linen, with a private bathroom en-suite,
Services of a professional guide, safari chef and camp assistants, complete with a supply vehicle,
Game drives and local transfers in customised safari vehicles,
Exclusive  camping in  private  campsites  within  the national parks and reserves,
All entrance and camping fees within the national parks and reserves,
All meals and drinks (mineral water, soft drinks, beer, wine and G&T) whilst in Tented Camps,
All activities as specified in the itinerary

Not included:
Travel Insurance,
All flights,
Items of personal nature,
Toiletries,
Staff gratuities,
Optional safari extensions,
Any drinks at lodges or accommodation other than the Tented Camps per itinerary 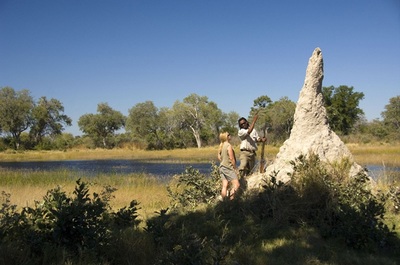 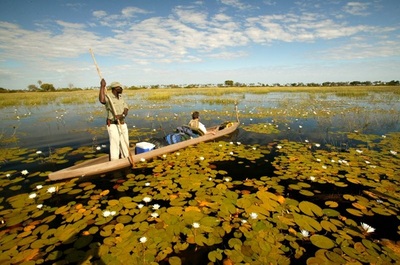