Day 2 Victoria Falls
Additional activities may be booked directly at Batonka Lodge, and will be for your own account.  Or we can pre book them on your behalf.

Day 3 Northern Chobe
After breakfast, our representative will collect you from Batonka Guest Lodge, and he will drive you across the border, into Botswana and onward to Chobe Bush Lodge, approximately one hours’ drive away.

Chobe Bush Lodge is situated in Kasane directly on the border with the Chobe National Park.  Right on its doorstep four African countries meet - Botswana, Namibia, Zimbabwe and Zambia.

Day 4 Northern Chobe
Known for its great lion population, huge herds of elephant and buffalo, Chobe National Park is only a short drive from the Lodge.

The Chobe National Park is one of the world's last remaining true wilderness areas and one of Africa's greatest game parks. Chobe is the third largest park in Botswana (after the Central Kalahari Game Reserve and the remote Gemsbok National Park in the south-western corner of the country) and covers an area of 10,698 square kilometres.

Chobe National Park is home to huge herds of Elephant, Buffalo, and Burchell's Zebra and high densities of predators such as Lion, Leopard, Spotted Hyena and Cheetah. The park is also notable for the presence of more unusual antelope species like Roan and Sable, Puku, Tsessebe, Eland, Red Lechwe, Waterbuck, and the rare Chobe Bushbuck. Other more popular species such as Giraffe, Kudu, Warthog, Wildebeest and Impala also abound.

Chobe has an amazing variety of habitats, ranging from floodplains, baobab, and mopane trees and acacia woodlands, to verdant flood grasslands and thickets bordering the Chobe River. Flowing along the Park's northern boundaries are the Linyanti and Chobe Rivers, while in the south the Savuti Channel brings life to the Mababe Depression. Over and above the elephants, the Chobe National Park has an amazing variety of game, and many brilliantly coloured birds. Today you will enjoy a boat cruise and an afternoon game drive.

Day 5 Savute
After your early morning game drive and breakfast, a representative of Chobe Bush Lodge will drive you to Kasane Airport (10 minutes), in time to meet the pilot who will charter you, in a light aircraft, into Savuti airstrip, some 55 minutes away.
Camp Savuti epitomises the Botswana safari experience. From the abundant game viewing to the authentic, tented accommodation, this is the traditional way to spend time in one of Africa's most superb wildlife regions.
Visit Camp Savuti to experience the thrill of getting close to top predators and to watch them in their natural habitat from the comfort of an open-air 4x4 vehicle, guided by knowledgeable rangers.
The area is renowned for its large population of bull elephants and visiting Camp Savuti offers the chance of witnessing the unique interaction of the resident predator species. Visit Camp Savuti for an unforgettable experience. Experienced and passionate guides will ensure that visitors leave with irreplaceable memories in wildest Botswana.
​
The Savuti is a region that is secretly located away from the peak season crowds at the Chobe riverfront. It is the remote home ground of Camp Savuti, positioned on the banks of the Savuti Channel and close to the famous Savuti Marsh.
Upon arrival at Savuti airstrip, guests will be met by a representative from Camp Savuti and driven the last 20-40 minute journey to the camp. This road transfer could be considered more of a game drive, as it traverses through the wilds and there is a likely chance of spotting any number of animals before even arriving at camp.

Day 6 Savute
Camp Savuti is all about its prime positioning on the Savuti Channel. It is an unfenced camp and receives regular wildlife visitors, which gather at the Savuti Channel to drink. Elephants browse the trees in camp, and birds flit between branches, creating a game-viewing paradise right in front of camp.

The Savuti Marsh is known as one of Africa's wildlife hotspots; landscape and ecology that supports a wide array of plant, bird and animal life. During the rainy summer months is when the game flocks to the Savuti region. A mass migration of zebra occurs as these striped ungulates arrive in the Savuti to bear their foals.
***Please note that the Savuti Channel is currently not flowing***

The Savuti is one of the best regions in Africa to see the rare and endangered African wild dog. These canines live and hunt in packs and collectively, they are some of the most efficient hunters out there.

Lions are abundant in the Savuti. National Geographic filmmakers, Dereck and Beverly Joubert, have been filming lions and their behaviour in this area for over 2 decades. Years ago, Savuti lions formed huge prides and worked together to take down elephants as prey, and although this behaviour is not seen often any more, there is no telling what could happen in the wild.

Other frequently seen predators are hyena, cheetah, and leopard. Hyena are said to steal up to 20% of all lion kills, and it is well-documented that these two predators are 'eternal enemies'. Cheetahs are highly endangered and they are also very specialised hunters, while leopards are seen hoisting their prey into the trees.

Mammals - The Savute's location in the west of the Chobe National Park makes it a home to a great number of mammals. Most significantly, the Savuti boasts a population of elephants quite unlike any other. The marshland and waterways become crowded with elephants during the summer months when the Savuti Channel feeds the land with water.

One of Savuti's biggest claims to fame is the presence of an annual zebra migration between the Linyanti and the Savuti. With the arrival of the rain comes the migration of thousands of zebra from the Linyanti to the Savuti (November).
They are not the only ones seeking out the fresh, new grass, and are accompanied by an array of herbivores, like kudu, impala, wildebeest, warthog and hippo. These are only a few mentionables out of the wide variety of mammals, large and small, that are found in the Savuti.

Birding - The Savuti Marsh is a vast area and alongside its rich wildlife population, the birdlife is very well represented. Colourful flocks of carmine bee-eaters celebrate the rainy season and fly about in large numbers as game vehicles trundle through the long grass. Secretary birds with their long legs and quirky feathers strut along the ground and perch on top of trees; kori bustards can be seen and admired for their huge size; thousands of red-billed queleas take off from tree tops in unison and cast shadows on the ground below them; African fish eagles are iconic and can be seen and heard soaring high above the channels and marshlands.
Ground birds like francolins and guinea fowls chirp noisily as they scuttle along, while water birds like storks, herons, lapwings and kingfishers keep watchful eyes on the rivers and waterways.

Day 7 Okavango Delta
Today you will be chartered to Moremi Crossing Camp, in the heart of the Okavango Delta.
The Okavango is an immense river that never meets the sea. Instead, its crystal clear waters spread across the Kalahari Desert, forming Africa’s largest wetland wonder, before the formidable African sun swallows the last of its outstretched fingers. The Delta is an abundant oasis amid the vast plains and pans of the desert that covers most of Southern Africa. Its waterways are a mesh of meandering and intercepting channels, creating a haven for Africa’s most celebrated wildlife.

Day 8 Okavango Delta
The main activities are mokoro (traditional dugout canoes) powerboat excursions, and guided game walks with experienced guides who have spent their lives accumulating knowledge and understanding of the complex ecosystem of the Okavango Delta. As they show you how to silently observe nature with minimal impact you will begin to realize the privilege and quiet excitement of being in one of those places that makes memories for you.

Chiefs Island where your activities take place offers one the of largest populations of African wildlife in the Delta area.  Sightings may include lion, leopard, elephant, buffalo and packs of wild dog running across the plains of the Delta. The concession is also home to hippo, crocodiles, plains zebra and a variety of buck, including the red lechwe. It is renowned for being a bird watcher's paradise, with over 240 species of bird flourishing in the swampland environment, including the rare Pel's Fishing Owl and the endangered Wattled Crane.

In the evenings you can relax in the elevated main lodge, or lie in the swimming pool sipping your drink watching the majesty of the African sunset, whilst reflecting on your day with fellow guests.

Day 9 Moremi area
After an early morning activity and brunch, your pilot will collect you from Moremi Crossing Camp airstrip, and will charter you to Sango Safari Camp, 25 minutes away.
Sango Safari Camp nestles in the shade of huge trees, overlooking the Khwai River.  Close to the traditional Khwai Village, and bordering the world famous Moremi Game Reserve, this small and intimate camp offers guests the perfect base from which to explore the wildlife and cultures of Botswana.  This intimate safari camp is named for the Sango Family, some of the original inhabitants of the Khwai area, and now part owners of the camp. Guests will have the chance to learn first-hand about the unique lifestyle and experiences that come from living and growing up in one of the most wildlife rich areas of Botswana.

Days 10 and 11 Moremi area
With the Khwai River forming a natural border between the Moremi Game Reserve and the Khwai Concession, animals travel freely between the reserves. Situated on the river overlooking the Moremi and with access to both these magnificent wildlife areas, Sango Safari Camp is focused on delivering an exceptional wildlife experience allowing guests to take advantage of a host of wildlife activities including; open vehicle game drives in Moremi and the Khwai area, guided bush walk and night drives.

With a combination of permanent water, seasonal floodplains, open grasslands, riverine forests, and dry woodlands this incredibly rich habitat supports a diversity and abundance of mammals and birds rarely matched in northern Botswana. Sango Safari Camp invites you to share in this bounty. All activities are subject to seasonal availability and weather conditions. Walking and mokoro activities may be limited in the wet season (December - March) due to dense vegetation.
​
Moremi Game Reserve is surrounded by wildlife management areas of the Okavango, with no boundaries between the concessions and the reserve allowing wildlife to move between the woodlands in the wet season when water is plentiful and back to permanent rivers and lagoons in the dry season. The prior inhabitants in the area (the River Bushmen) were moved to the periphery of the reserve, establishing Khwai village near the North Gate exit of the park. The Khwai area is managed by the community through the Khwai Development Trust. This area offers the same wildlife experience as the reserve itself. A key advantage of being outside the reserve is the freedom to do walking safaris and night drives as the area is not governed by the same rules.
The vegetation is varied, with dry land complemented by permanent and seasonal swamplands, resulting in an excellent diversity of both wildlife and birdlife. Game is more concentrated around the permanent water during the dry season (Apr - Oct) with it becoming very hot in the later months. The rainy season (Nov - Apr) invigorates the lush scenery with wild flowers, dramatic thundershowers, spectacular sunsets and the birthing season brings great predator and prey interaction. 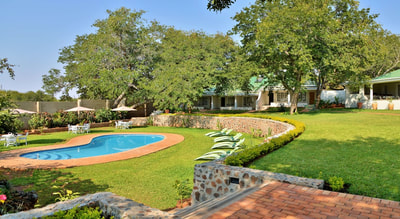 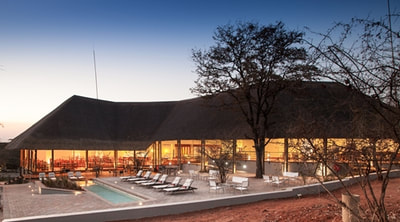 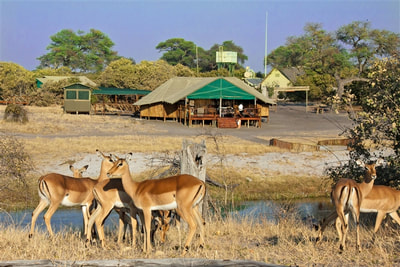 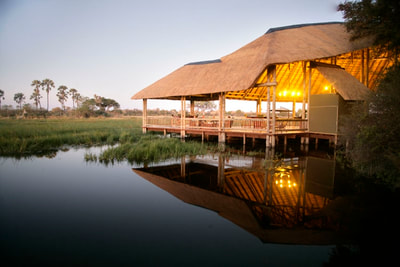