<
>
Day 1 Central Kalahari Game Reserve
Arrive at Johannesburg International Airport where you will check in for your flight to Maun Airport in Botswana. Upon arrival you will be met and assisted onto your charter flight to Tau Pan Camp.

Tau Pan is the first semi-permanent camp built inside the Central Kalahari Game Reserve and offers truly incredible views from the ridge of an ancient sand dune, an unusual experience in a land as flat as Botswana. It overlooks the famous Tau Pan, a large salt pan recognized for its stark beauty and remoteness. ‘Tau’ means lion in Setswana and the pan is so named for its pride of iconic black-maned Kalahari lions, who are frequent visitors to the camp as well.

Days 2 and 3 Central Kalahari Game Reserve
As well as game drives, activities at Tau Pan include day trips to the well-known Deception Valley, Sunday, Piper and Passarge Pans. A particular favourite is the bushman nature walk where visitors learn how the San used to gather food and water.

The Central Kalahari Game Reserve was established in 1961 and covers an area of over 54,000 km making it the second largest game reserve in the world. The land is mostly flat, with gently undulating grass and bush covered sand dunes, with some areas of larger trees. Many of the river valleys are fossilized with salt pans. Four fossilized rivers valleys meander their way through the reserve, including the well-known Deception Valley, which began to form around 16,000 years ago. Rainfall varying between 170 and 700 millimetres per year generally falls between late November and March. During these summer rains the Reserve completely transforms as virtually overnight the plains and pans burst with flowers and sweet grasses.

At this time the Kalahari is one of the best game viewing areas in Botswana, and migratory species such as zebra and wildebeest return to the grazing lands in their thousands.  Many other antelope species are found in the Kalahari including Cape eland, springbok, steenbok, gemsbok, red hartebeest and kudu. Predators abound including the famous Kalahari black-maned lion, cheetah, leopard and wild dogs. The extremely rare brown hyena is only found in the desert environment. Bird life is aplenty with the world's largest bird the ostrich and the world’s heaviest flying bird, the Kori Bustard. Raptors from the most common Pale-chanting Goshawk to the Rock Kestrel, Bateleur, Brown and Tawny Eagles are also seen regularly.  The winter/dry season, from May to September, is an equally wonderful time to visit the Kalahari as the many resident species and predators congregate close to any surface water and pans.

Some unique Kalahari experiences
Day 4 Moremi Game Reserve
After your morning activity and breakfast, you will be chartered from Tau Pan Camp to Rra Dinare Camp, 55 minutes away.
Rra Dinare is situated on a private concession adjacent to the Moremi Game Reserve on the south-eastern side of the Delta, overlooking the Gomoti River and its flood plains.  This Camp is located in a private concession of 67,000 acres and has been designed to embrace the natural surroundings of the riverine forest.

Days 5 and 6 Moremi Game Reserve
Since this area normally receives floods last it contains some of the closest dry-season watering points for the game that spreads out towards Nxai and Makgadikgadi Pans during the rains. Around this, there is a high density of game in the dry season but since quite a lot of the reserve is mopane woodlands (a favourite location for animals during the rains and early dry season) good game viewing is exceptional all year round.

The river system attracts a wide variety of game. Familiar favourites include Elephant, Buffalo, Giraffe, Kudu, Impala, Tsessebe, Hippo, Crocodile, Genet, Honey Badger and a host of Plains Game. Rare Antelope breeds including Roan, Sable & Eland, not usually seen in the Okavango region, occur here. As the Gomoti is the primary water source in the area, Lion, Leopard, Cheetah and Wild Dog come down to the riverside to drink and hunt, of course! The locations and views are spectacular with the classic flooding of the Okavango across the adjacent seasonal floodplains. For those keen on bird-watching, the combination of the wetlands and the drier Acacia and Mopane veldt provide a perfect habitat for a variety of aquatic species including Open Billed Storks, Hammerkops, Egrets, Ibis and forest/savannah dwellers including Raptors, Shrikes, Drongos, Sunbirds and Ground Hornbills.

Day 7 Khwai Private Reserve
After your morning activity and breakfast, you will be transferred by light aircraft to Sable Alley Camp, 25 minutes away.

Sable Alley lies in the 200,000 hectare Khwai Private Reserve concession. Red Lechwe, Waterbuck and Reedbuck, along with many antelope species are full time residents and are often spotted, whilst sightings of Lion, Leopard, Spotted Hyena and Wild dog are excellent. Elephant abound and very quickly become an all-time favourite.

Day 8 Khwai Private Reserve
Sable Alley’s expert guides are on hand to interpret the sights, smells, and sounds of the bush. The massive 440,000 acre Khwai Private Reserve comprises some of the most fantastically diverse habitats in northern Botswana, including riverine woodlands, open floodplains, rivers and mopane woodland. This range of habitats means a range of wildlife, including lion, leopard, wild dog, elephant, buffalo and of course the eponymous sable antelope. Game viewing will not just be from traditional safari vehicles (both during the day and at night), but also from mekoro — enjoy being gently ‘’poled’’ along the water in a traditional canoe—a wonderful way to do some bird watching and game viewing. Boating is a highlight when water levels are high).
Truly one of Botswana birding Mecca’s - the western reaches are prime habitat for the uncommon Rosy-throated Longclaw. The entire length of the river is hunting domain for the Bat-Hawk. Other interesting raptors here are Cuckoo Hawk (rare), Long-crested Eagle and Black Sparrowhawk. More commonly Tawny Eagle, Steppe Eagle, Lesser-spotted Eagle, Martial Eagle, Bateleur and African Hawk-Eagle. The waterways host Africa Rail, African Crake, Greater Painted Snipe, Allen’s Gallinule, Lesser Jacana and Lesser Moorhen.

End a day of exhilarating game viewing with a night drive where you will encounter nocturnal creatures such as leopard, spikey porcupines and fearless honey badgers.

Day 9 Savute
After a morning activity and brunch, you will be chartered from Sable Alley Camp to Ghoha Hills Camp, 50 minutes away. A representative of Ghoha Hills will meet you at the airstrip, and will drive you to the Lodge, 45 minutes away.

Ghoha Hills Savuti Camp is perched on the Ghoha Hills, overlooking the vast expanse of the Savuti area of the Chobe National Park. The elevated position of the Camp offers some of the most breath-taking views in Botswana.  Ghoha Hills Savuti Camp aims to provide discerning travellers with a unique, first class safari experience in an eco-friendly and eco-sensitive environment.  The Camp lies on the ledges of Ghoha Hills, some 45 minutes north of Savuti Airstrip, and it provides both privacy and exclusivity to its guests, especially as the Savuti area can get quite busy during high season.

Days 10 and 11 Savute
The Savuti has over the years developed a reputation as a prime place to view predators in Botswana, especially lion and spotted hyena. The Savuti lies within the Chobe National Park and boasts one of the highest concentrations of wildlife on the African continent. The Camp is located in an area abounding with species such as elephant, buffalo, lion, leopard, roan antelope, giraffe, spotted hyena, jackal and a variety of birdlife.

Game activities will include morning and afternoon game drives in open 4×4 safari vehicles, guided walks in the vicinity of the camp, bird watching and stargazing. Game drives are conducted in comfortable 4 x 4 safari vehicles and take guests to the nearby pans, which are exclusively located on the property's own road network and promise to provide guests with great game viewing within close proximity to the lodge. Guests will also enjoy the full Savuti experience – the marsh and the Savuti Channel. There is a bird hide only one kilometre from camp which provides guests with a peaceful haven to view great wildlife all day.

In the dry season thousands of dove and sandgrouse come down to drink in the mornings and are under constant surveillance by Yellow-billed Kite, Tawny Eagle and African Hawk-Eagle. Red-crested Korhaan are common in the Kalahari Apple-leaf (Lonchocarpus nelsii) veld. The marsh is the summer home for good numbers of Caspian Plover and Montague’s Harrier as well as Chestnut-backed Sparrowlark, Grey-backed Sparrowlark, Northern Black Korhaan, Rufous-naped Lark, African Pipit and Desert Cisticola. Dickenson’s Kestrel, Amur Falcon* and Red-necked Falcon are found along the perimeter of the marsh.

Day 12 Northern Chobe
After your morning activity and brunch, you will be chartered from Savuti to Kasane Airport (55 minutes), where a representative of Chobe Elephant Camp will be waiting to transfer you to the Lodge.

Chobe Elephant Camp is a uniquely designed lodge, built to take advantage of the incredible views overlooking the sweeping Chobe River floodplains while offering a comfortable refuge from the harsh African conditions.  Built from the same red Kalahari sands that dominate the northern part of Botswana, this eco-friendly lodge is ideally positioned to take advantage of everything this incredible destination has to offer. Be it the spectacular wildlife that the Chobe River is famous for, or the opportunity to interact with the local Sibuya Tribe who live within this wildlife haven, Chobe Elephant Camp offers its guest a true African adventure.

Day 13 Northern Chobe
The Chobe River area contains an interesting variety of habitats and is rich in plant life, with mopane woodland, mixed combretum, sandveld, floodplain, grasslands and riverine woodland. Many trees have suffered considerable damage from the high numbers of elephants, who push them over and rip off the bark - and some woods have been totally denuded.

Few people come to Chobe without taking a trip on the river to see hundreds of hippopotamuses and crocodiles or to witness the exquisite sanguine sunsets sinking slowly over the water.

Notwithstanding the elephants, Chobe has some of the finest game viewing in Africa. It is notable for huge herds of buffalo and zebras, lechwe, Chobe bushbuck and being the southernmost point where puku antelope can be seen. Where there are buffalo, lions are never far away and there is a good chance of seeing large prides who laze around in the shade all day and only yawn themselves awake at dusk. Hyena and leopard also hunt at night while cheetah are diurnal predators.

Chobe is rich in bird life with the Pel's Fishing owl a favourite for bird watchers and the peculiar strangely beaked African skimmer another speciality.  African fish eagles are common and their distinctive cry is as evocative of the African wilderness as the roar of the lion.

Day 14 Kasane
After breakfast at Chobe Elephant Camp, your Guide will drive you back to Kasane Airport, where you will check in for your scheduled flight back to Johannesburg International Airport. 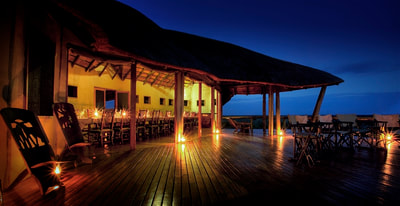 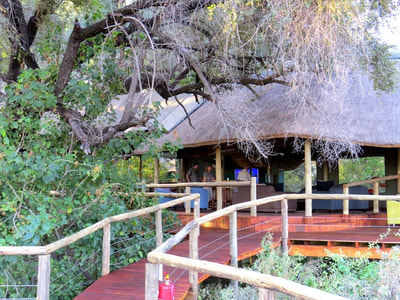 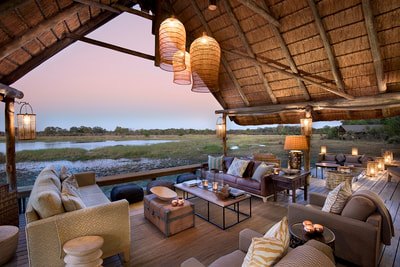 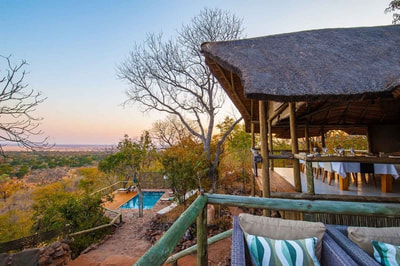 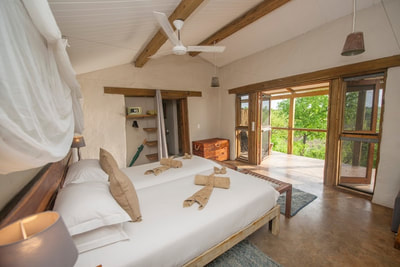