The Nxai Pan area is a series of small fossil pans, which are covered in short, nutritious grasses, interspersed with ‘islands’ of mainly umbrella thorn trees (Acacia tortilis). Nxai Pan lies to the north of the Makgadikgadi Pans, and in the dry season the wildlife concentrates on one artificial water hole, just north of the Game Scout Camp. In the February to April wet season, the concentrations of wildebeest, zebra and oryx are spectacular. In addition there bat-eared foxes emerge in good numbers, while lion, hyena and wild dog have followed the antelope to the area.

The Nxai Pan and Kudiakam Pan are both a part of the ancient lake bed that formed Sua and Ntwetwe Pans. Kudiakam comprises mini salt pans, but thanks to its higher elevation, Nxai Pan escaped encrustation by leached salts.

The Makgadikgadi pans cover some 10 000 square kilometres in salt. Some of the individual pans are enormous, others the size of small ponds. Surrounding the pans are vast grasslands fringed with palm trees. The pans flood after the rains (November to March), and this attracts thousands of water birds to the shallow pools. The flamingos and pelicans flock to the salty waters and the animals of the plains to the fresh grasses. The flamingos migrate from as far away as East Africa to filter the newly released nourishment and algae from the waters.

These pans are the remnants of the once great Lake Makgadikgadi that existed some 2 million years ago, and presumed to have dried up around 1 500 years ago. The lake was 80 000 square kilometres in extent, and up to 55 metres deep, making it the largest inland sea in Africa. Over the years a combination of climatic changes and tectonic activity caused the water to dry-up.

Although named for the Pans, the Makgadikgadi section of the park is mainly grassland, with only a small area of salt pan. These grasslands also attract wildlife by the thousands, in the rainy season. There is surprising variety in the park – with 4 main vegetation types: riverine woodland, scrubland, grassland and the salt pans, which support Palmtree woodlands, on the edges.

The range of antelope includes impala, oryx, hartebeest and kudu, but they only appear in large numbers during the migrations during May and June. Lion, hyena (brown hyena are prevalent in the area) and cheetah are also present and when there's water, and the Boteti River supports a healthy hippo population.

The Nxai/ Makgadikgadi area has also been made famous by its magnificent baobab trees. There are Baines’ Baobabs, south of Nxai Pan, which form an impressive group. They are named for the painter, who immortalised them in 1862. Baines was travelling with John Chapman at the time, but has also travelled with Livingstone.

At the ephemeral Gutsa Pan, 30 kilometres south of Gweta (the village close to the entrance of Nxai Pan), you will find Green's Baobab, which was inscribed by the 19th century hunter and trader Joseph Green. Fifteen kilometres to the south-east by rough track is the enormous Chapman's Baobab, which measures 25 metres around and historically served as a beacon in a country of few landmarks. It's thought that it was also used as a post office by passing explorers, traders and travellers, many of whom left inscriptions on its trunk. As of 2016 this baobab seems to have collapsed, and is feared dead.

Near the south-western corner of Sua Pan is Kubu Island – an ancient 20-metre high scrap of rock with its ghostly Baobabs, surrounded by a sea of salt. In cool weather, this unique sight can make visitors feel like castaways on an alien planet. In Zulu-based languages, 'Kubu' means Hippopotamus, and as unlikely as it may seem, given the current environment, the site may have been inhabited as recently as 500 to 1 500 years ago. On one shore lies an ancient crescent-shaped stone enclosure of unknown origin that has yielded numerous pot shards, stone tools and ostrich eggshell beads. 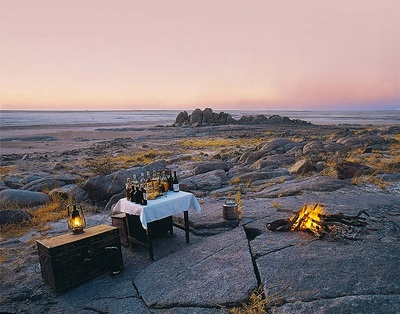 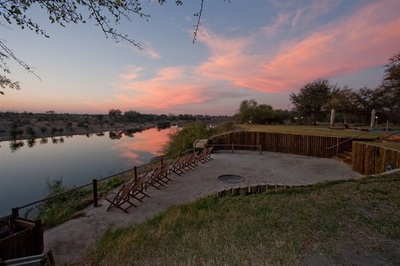 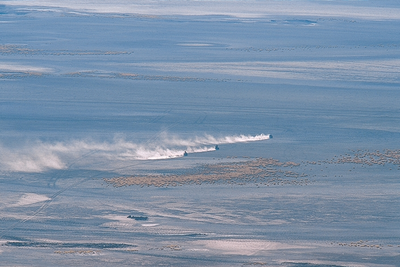